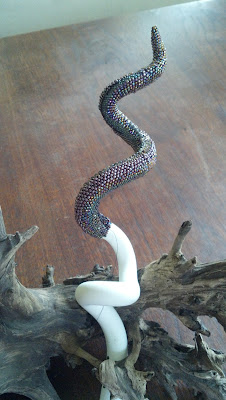 Wow. Just wow.
2012 has been an amazing year that I can't believe it's already over.  I still have so much to do!

I have had a number of things happen in my art career:

I gave my first Program with the Needlework and Textile Guild of Michigan followed by a day and a half workshop.  Although I was a little nervous, it went smoothly, and I not only enjoyed myself, but I received so much positive feedback.

And I have had a successful year of new projects and Commissions:

My first beaded sculpture piece is well on it's way: "Uprooted I" (and I just put a coat of walnut oil on the root-base last night)

"She can't see the Forest through the Trees" is probably more than 2/3rds finished (a leaf update will be coming soon, I have been sewing them together and it's turning out wonderfully)

And, as usual, I took the time to make an inspired Halloween Costume, including teaching myself some millinery, getting back to dying full-force, and reminding myself that conductive thread and LED's can be simple.


Looking through my blog this year, I have 21 more posts than 2011.  And I'm finally feeling that this year has been wildly successful after listing it out.  I have no real New Years resolutions beyond trying to be more organized and going bigger and better with my work.

2011 was a lot about productivity (I recorded approximately how many pieces of jewelry I could make, per week and the total of those items per week), 2012 was all about moving my work from jewelry to experimenting with larger pieces to exhibit, 2013 will probably continue on the lines of my desire to exhibit more.  I will be working on the pieces floating around in my head and on sketchbooks that are beyond what people already expect from me.

I am excited.  Now, for this evening, we are racing lobsters and eating them with a small group of awesome friends.  I hope your New Years Eve is as eventful as ours is! 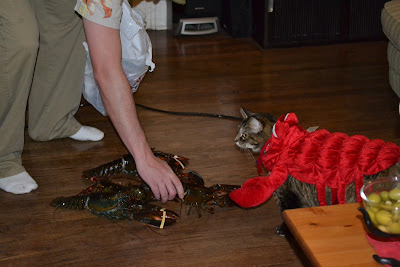 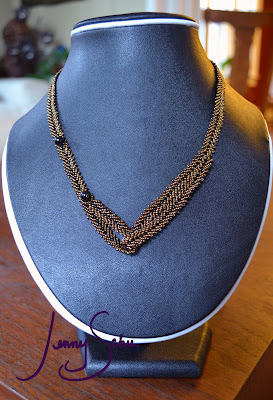 It's the time of year that creeps up on me.  Halloween is over, November is a blur of trying to get sale-able work done and into displays.  Then there's the pieces that people want you to make for holiday gifts.  You never know when those are going to come up on you.

Zack and I were sitting at P Squared Wine Bar, a new favorite spot that's opened up downtown and I was getting some beading done.  I had started a St. Petersburg chain with the dark gold seed beads that seem to be my staple bead for this holiday season and it caught a friend's eye.

He asked what I was making, and if he could purchase it for his mom for Christmas. Not a problem, I was focused on trying to get a different style necklace done, but I hadn't beaded the chain too long so that we couldn't switch designs.

We met last week to go over options on the dark gold and black chain and he wanted to keep it simple.  I love it, these seed beads have really been speaking to me, so it's nice to know that I'm not the only one that likes them on their own. 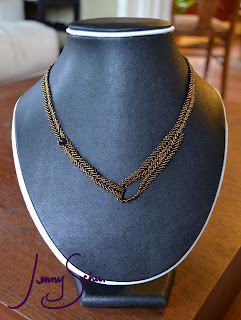 The finished necklace can be adjusted to two lengths on the black swarovski pearls along the left side of the piece.
at December 17, 2012 No comments:

Jewelry Show at Speaker Law Firm (last one this year!) 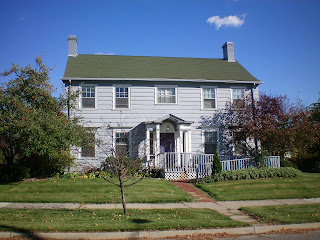 Wednesday, December 12, 2012
10:00am-4:00pm
﻿
If you are in downtown Lansing and need a break from your usual work day we welcome you to come by Speaker Law Firm for my last solo showing/sale of my jewelry for 2012!  Below is a sample of what I'll be bringing in, along with plenty of beaded leaf and pod earrings! 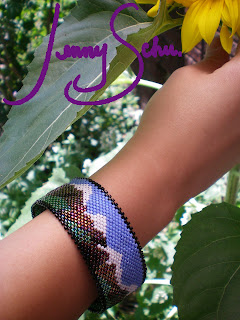 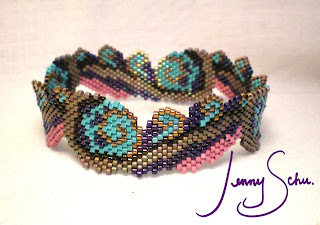 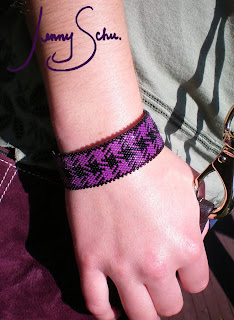 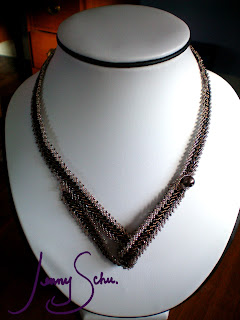 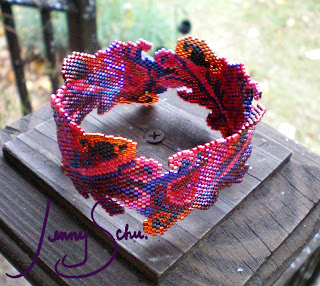 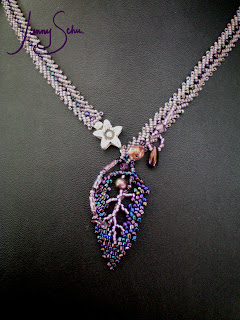 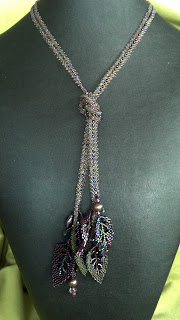 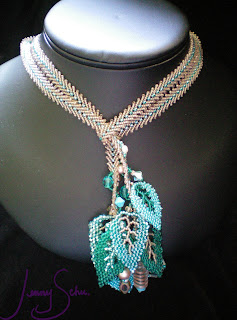 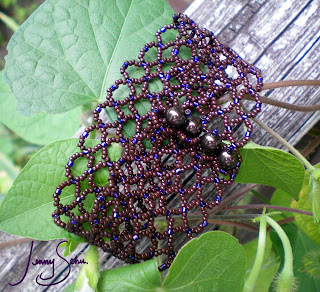 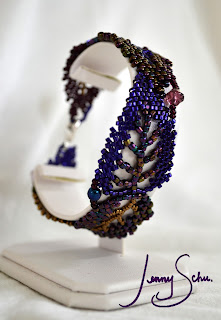 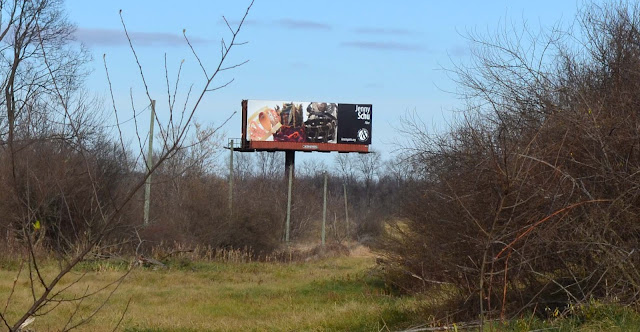 Ok, so it's not the best photo, but I wasn't prepared to trudge through the field and muck to get closer to my billboard.  But I have a billboard!  I can't possibly try to hide my excitement. How is this possible? The Arts Council of Greater Lansing of course.

It's a year by year basis where they team up with Adams Advertising to get billboards up for artists via the Arts Council. They call it the "Art in the Sky" program.  It's offered to the artists who have received the Individual Artist's Grant (all of them, including past grantees), so when I got the email that they were doing Art in the Sky again, I jumped on the opportunity.

The photo is a grouping of my bangles, taken by Luke Anthony Photography.  I have gotten so much use out of the photo shoot that Luke did for me, I can't want to get my larger pieces done for him to take more photos.

This activity is made possible by the Arts Council of Greater Lansing
at December 07, 2012 4 comments:

Ornament for the Arts Council Tree 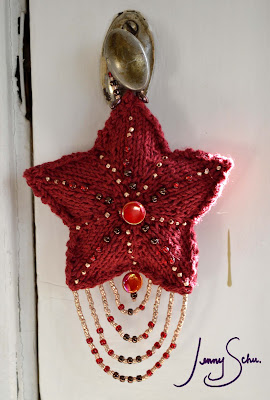 Valley Yarns posted this free pattern on Webs Yarn website for a knit star and I've fallen in love with it (I've knitted a few while knitting on the elliptical so far).  So I already had the base together when the Art Council of Greater Lansing emailed out that they needed ornaments.

I finished this little guy today and dropped it off  to go get into the holiday spirit. 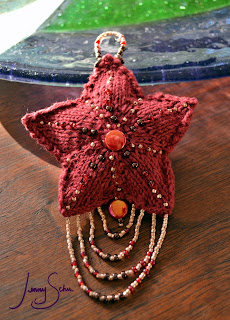 Happy Holidays! And thank you to the Arts Council of greater Lansing for a wonderful Holiday Glitter event last night! 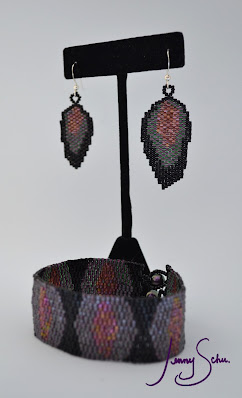