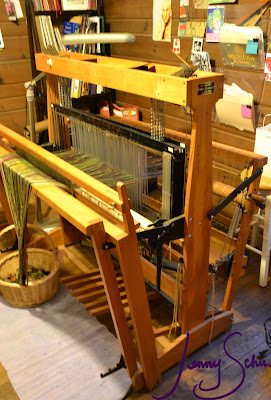 Thanks to various opportunities in my lifetime, I have gotten to weave on many different types of looms.  I started learning to weave by helping Joetta (a member of my guild at the time, the Black Sheep Weavers) warp looms in the summer at the school she taught at.  I have no idea what I was weaving on back then, I was just happy to be on a floor loom.

In college, I ended up weaving on many smaller floor looms to start off, but as my weaving projects got larger, I graduated to using the larger looms in the class and for the most part taking it over for a good two years. The loom I favored was a 12 harness Macomber Loom.

As I was finishing up my art degree, my professor offered a loom up for grabs that had been donated to the fiber program.  Sherri would always tell people that the Art School was happy to take looms and then she would send them off with a student that wanted one.  I was one of these students. To this day, I'm still not sure what my old loom brand was, but despite it's large size, it could break down far enough for me to move it in a station wagon and put it back together without help (although help was always nice).

My post-college loom moved from Michigan to Colorado to Wisconsin and back to Michigan with me. It was functional for my purposes since it was a four harness which meant I could still do double weave and Theo Mooreman inlay weave on it. I was weaving a significant amount while in Colorado, but then was beading a lot more as I moved around and weaving projects sat for longer on my loom so I didn't think much about upgrading.  Then I got my dye lab fully up and running, meaning I can now dye my own yarn, and the amount I started to weave increased as did my frustration with the old loom.  So, I started keeping my eyes peeled for a Macomber that was more than four harnesses.

I look at Craigslist a lot to see what kind of looms people are trying to move.  I found a post for a Macomber that has 6 harnesses but can take up to 10 harnesses.  After assessing the post, I realized that it was probably my friend Sue selling it because she was amidst a move and one only puts a loom up for sale with no reed if you're still weaving.  So I asked her about it and Sue said I should take a look because she had cannibalized some of the parts on this loom to put on to her other Macomber.  After taking a look, I wrote her a check and we celebrated with wine.  I didn't have to move it right away and I needed my husband and another strong guy (Pat) to carry it out of Sue's basement and lift it in and out of the trailer that Sue luckily was willing to help move her to my house.  And so, I finished my last weaving on the old loom, took her apart and moved the Macomber to her new home in my loom room.  I decided on the name Delilah for her and put on a sample weaving of leftover warp from "In Progress."  I wanted to use all of the harnesses to make sure I didn't need to get parts right away.  I finished a piece of fabric to use at my 3-Day workshop with Mary Sue Fenner at Michigan League of Handweaver's Conference and it is now part of a jacket.

I really enjoyed weaving fabric for the sake of weaving fabric again.  It's the closest to the feeling of meditating that I've had in a long time.  So I wound off a warp with a ton of leftover rayon that I dyed in college and am ready for some more-meditative work between the insanity of making my Halloween Costume (potentially a larger undertaking than last year's jellyfish costume) and the onslaught of Holiday shows. 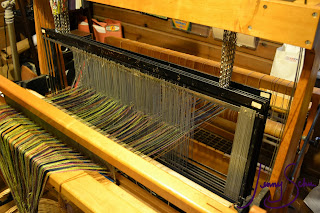 Congrats on your new loom! I just found your blog and have been enjoying reading it. I also work on Macombers - at home and at school. Happy weaving!

Thanks Mandy, I'm glad you're enjoying reading my blog, it's a bit all over the map, but it is what I do. :) Happy weaving to you too!!!!

Congrats on your new loom. Macombers are the best. Between us, Helen and I have 6.

Gretechen, I'm guessing one day I'll have another one or two macombers...on the other hand, I will enetually need/want a workshopping loom that I can haul. 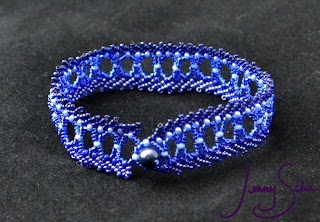