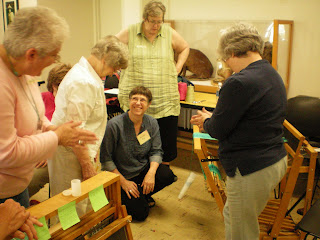 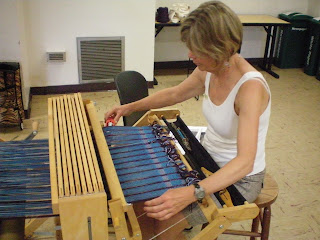 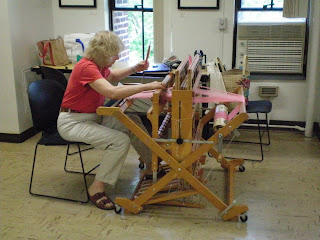 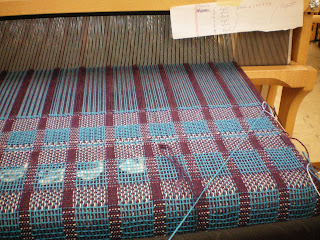 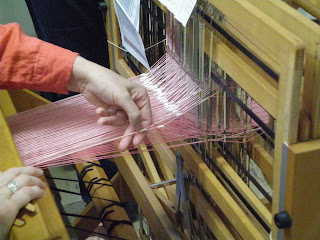 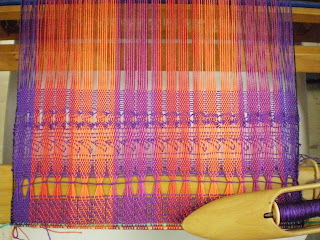 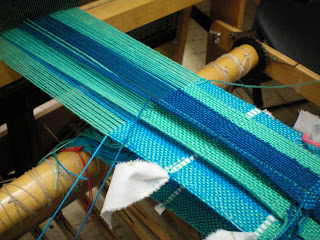 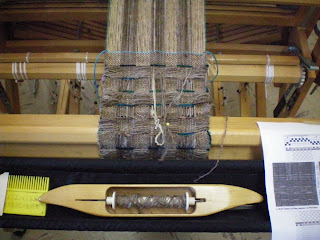 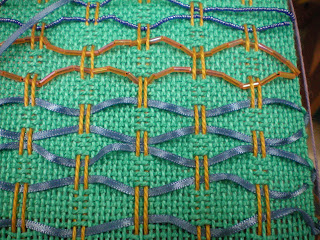 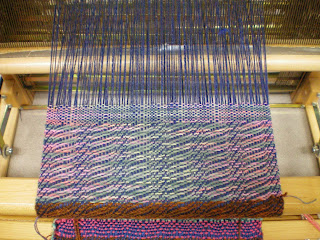 Undulating Twill.  One of the biggest reasons I've always wanted a loom with more harnesses.  You can do this on an 8-harness, but this draw up is for a 12-harness loom.
We also did a cloth that is solid when you weave it off, but when you burn out parts of it, those spaces create a double-layer in the burnout and stay solid where you leave it.
I was worried that my Theo-Mooreman weaving that I had been planning for the Michigan League of Handweavers Conference exhibit would change to something else at the end of this workshop, but I've got it on loom and am taking a break from serious beading to get back to my weaving.  Plus I have 2 looms going right now.  No one can weave 5 yards of Theo Mooreman in 3 days (that was on my loom), so I have to finish off that warp to return Martha's loom to her, and work away at my current project.
More to come on that.
at May 31, 2011 No comments: Links to this post 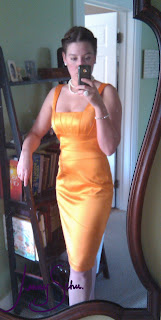 While we were in Washinton state in April, Zack had a business meeting so I had him leave me in Bellvue to hang out and bead or see the sights.  I stayed at a Starbucks for a while, finishing some earrings and mulling over making a bracelet that wouldn't compete with the Orange dress. 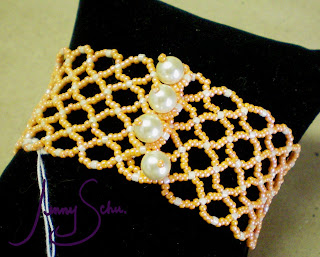 I'm sure this is a beading pattern from somewhere but it's sunk so far in my memory that who knows where it resurfaced from.  I was using tiny 15/0 orange beads and some white delicas for accents and directional beads.  When it came to figure out how to clasp it together, it turned out that the swarovki pearls that I had brought with me popped through the netting for the perfect made-to-fit clasp.  It was really just fate that brought this piece together. 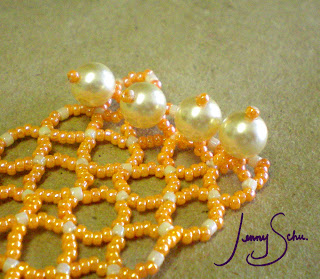 It was perfect for the wedding that we went to and it also helped me solve a problem I was having with the Blue Wave Diode Bangle.﻿  I needed a structure for the center of the piece, so I used this same netting pattern in silver lined clear seed beads with blue accent delicas.  I love how it turned out structurally for that piece and also the way the blue light bounces into the clear beads and spreads.
Definitly expect some more colors in this piece, it's simple looking but rather elegant with any outfit.
at May 26, 2011 No comments: Links to this post

I feel fortunate that my first LED bangle worked out so well after having issues with wiring this piece.  I made one, it was working but seemed to be ebbing instead of twinkling. I assumed that was a product of sparkle. Since it's stopped working I'm wondering if I crossed my threads just enough to make it act weird and then fizzle out.  So I re-made the whole piece but changed some of the structural design. 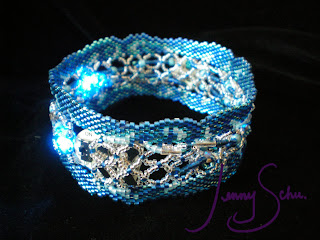 Here is the second piece working really well.  I am so excited about having an on/off switch now!


I had some major learning curves in this second piece, so here's what I changed from the first blue bangle to the second.  Some of it may have helped the second one work better, I'm not for sure though.  I am just trying to break down all of the possible problems from the first one. 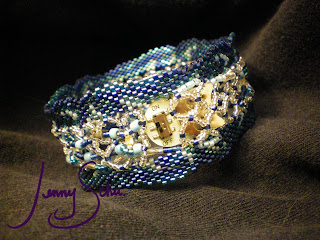 #1: Structure: LED sequins are fragile.
I am really rough on my work when I'm beading.  I break metal needles forcing them through beads while reinforcing pieces all of the time.  It never occurred to me that the LED lights were fragile too, whoops, my mistake!  They are durable, but this second bangle I did I broke 2 lights and conductive thread doesn't layer in very well for repairs.
I also used the lights as part of the structure of this bangle causing more stress on the LED sequin in this design.  I went back to my original design where the LED are "free floating" woven within the piece.  I actually created a beaded netting to hold the two end pieces together and not only was it easy to weave the LEDs in, but the blue lights glow into the clear beads in the netting creating a great effect.
structure photo

#2: Conductive Threading.
I have never paid much attention to where my thread is going within the beads before.  I think I may have shorted this one out due to one or two things:  1) my threads are touching somewhere within the woven part or b) I used seed beads with silver content and they may be touching other things.
#3: Metal Content in Seed Beads
I had thought about this before I even started in on using the conductive thread in my beadwork, but I was only considering "silver lined" beads to be a potential problem.  This is where the bead has a clear or clear-colored glass exterior and the hole of the bead is lined in a silver that causes a particular look for the bead.  This bangle I had pick out some silver delicas to use in the two end pieces, but forgot that they actually have silver in the content of the bead, interior and exterior. 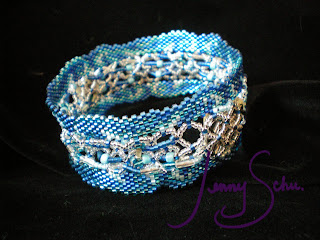 Original Design #FAIL that I spoke of: 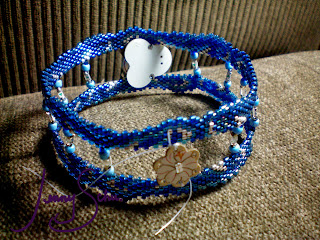 The Blue Wave Diode was finished last week, I blogged it, then something crashed, so here goes again.
at May 17, 2011 No comments: Links to this post

I have been looking at fun feather earring and hair extensions for months now.  Since I like to come up with new designs I decided to take the fad into my own beadwork.  These long feathersare apparently from a Grizzly Rooster and are super expensive so I may only be making a few here and there, or on special order (feel free to contact me if you want a certain color!). 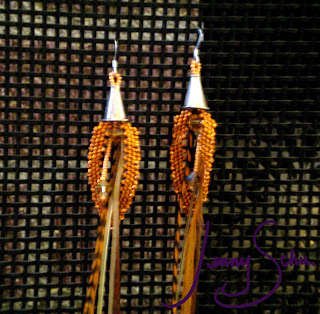 I'm finding that they're nice to wear for a pop of personality.  The fathers haven't been tangling in my curly hair (which I was worried about), and are really lightweight.  I have gotten a ton of compliments while wearing them the past few weeks too! 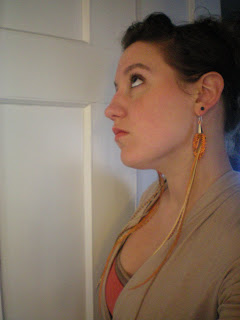 Deadlines are important for me.  I had set to work on this peacock tiara for Helen and since bead embroidery doesn't always keep my... 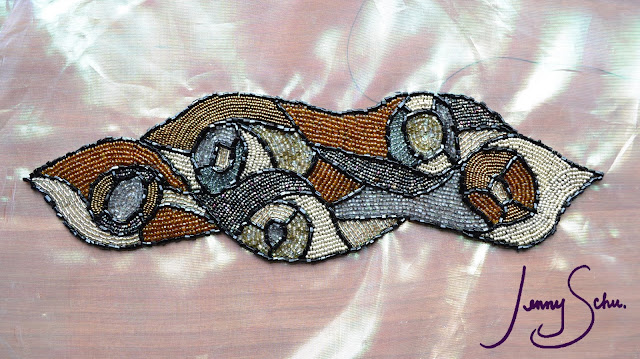