I have openings for up to 5 people on each day.  Payment is due 1 week before the class or the class will be canceled.  You can give Jenny a check or cash before hand, or go to http://www.jennyschu.com/ the front page accepts paypal (note the paypal button next to the date).

If you have your own beading materials the materials fee may be waived, here's what I will be providing for you to keep:

-1 large bead 6mm or larger for clasp (you pick from the workshop stash, I like to use these round Swarovski pearls: http://www.firemountaingems.com/swarovski-crystal-pearls.asp )


Here are what you may like to bring, but I will have on hand (and some for sale):

-velvet pads (either something on the link, or I have made some larger ones of my own with velvet around cardboard)

and last but not least, if you have problems with lighting, we will be in a room with florescents, you may bring your own light.  I have been told that this rechargeable ott lamp is great for workshopping: http://www.joann.com/joann/catalog/productdetail.jsp?pageName=search&flag=true&PRODID=xprd285431
at June 23, 2011 No comments:

Weaving: Finishing up a warp.

After a wonderful workshop with Briony Foy, I ended up with a loom that I needed to return to it's owner and about 12 feet of lavender warp still on it.

As a weaver, it is hard to just rip warp off of a loom if it's still weaveable.  Even if that which is warped on the loom is uninspiring.  Since it wasn't a background color that thrilled me, and the supplemental warps were not evenly spaced across the loom, I wanted to weave it off quick. I decided to take out the supplemental warps and just do plain weave.  In light of being tired of lavender (even 2 years after our wedding), I grabbed green for the weft to try to off-set it.  I'm pretty happy with the outcome. I always like green. 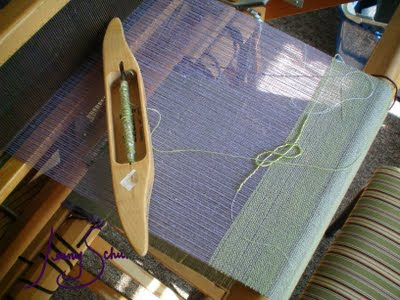 I also decided to add in some seed beads.  I thought that I would do this in my Theo Moorman that I warped on my loom, but I don't quite have the mental grasp on how to layer them into the supplemental warp, but getting them into a plain warp is easy!  I think I'll do a little tutorial on it soon.  It's somewhat time consuming (as most beadworking is), but if you're just going for some light sparkle in a scarf or wrap, it's not bad. 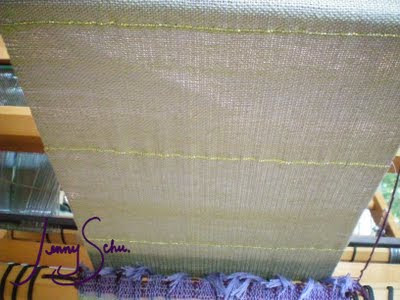 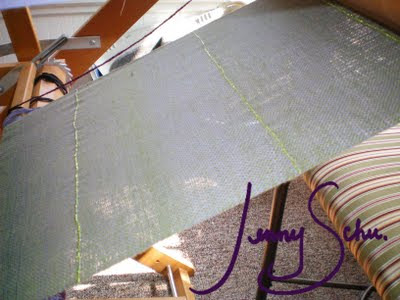 The way that I am weaving the beads into this weaving is great because the beads show on both sides of the scarf, yay! I'm actually just using the basic technique of beading on a bead loom.  You have to bunch some of the warp threads together as you go (using your best judgement).  When you weave the warp make up half of the square footage of the fabric and the weft makes up the second half.  With this piece the 11/0 seed beads are larger (spatially) than the weft so you have to make up for it by bunch some of the warp to keep it even. 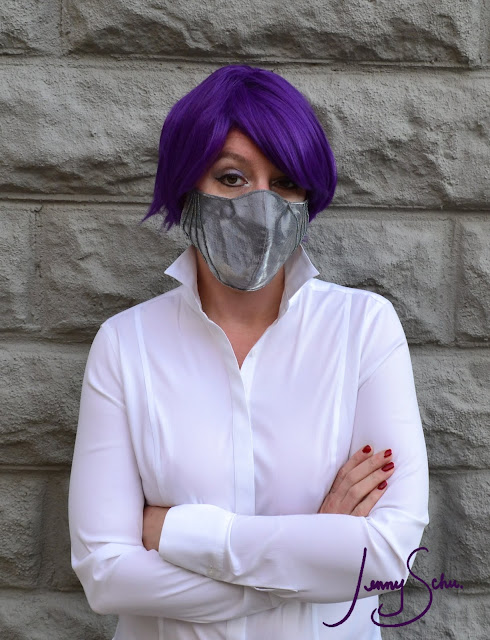