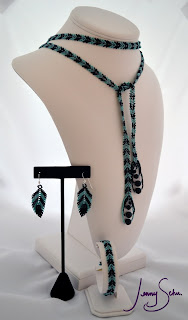 Since stripes and chevrons have been coming out, I've been taking advantage of the trend and playing with the same in my beading. 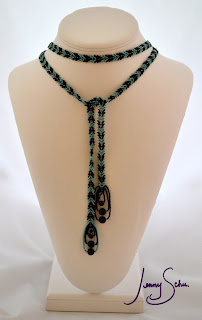 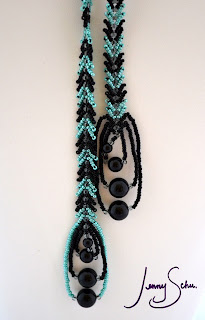 Lariat Necklace: $200.00
Since there's plenty of detail in the St. Petersburg chain of this necklace, I kept the embellishment on the ends simple.  I had initially tried to make the pearls on the ends "cluster" like I do with the leaves on my lariats, but it didn't look right, so I did loops.  I may try a fringe on another one. 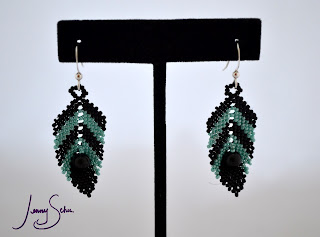 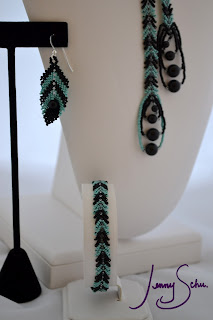 Simple Stripe Bracelet: $45.00
And of course, earrings and a bracelet to match.  It's hard to tell in these photos, but the earrings have a jet black glass pearl toward the bottom where the earring "cups" a little bit.﻿ 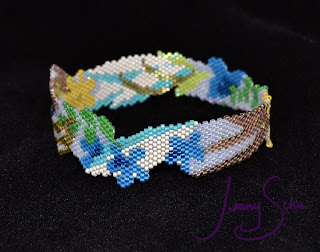 2013 Floral Bangle: $180.00
I bought a new dress over at Grace in Old Town a few weeks ago.  Adding to my dress collection for the weddings, showers and art openings (yay!) that are coming up this summer.  So, of course, the beautiful water-color leaves and flowers gave me fodder for a new bangle inspiration.﻿ 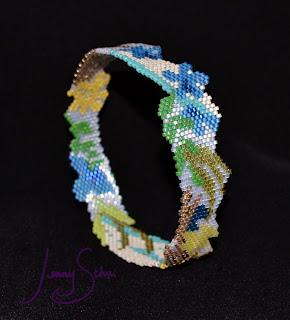 I had originally thought of making the bangle really wide (like 2 1/2+ inches), but decided that the design in my head would fight with the busy pattern of the dress.  There's a lot of information that I still wanted to put into this bangle, so I did not do a repeat pattern on it.  Meaning, unlike most of my bangles, it's a different image on every side.﻿
﻿ 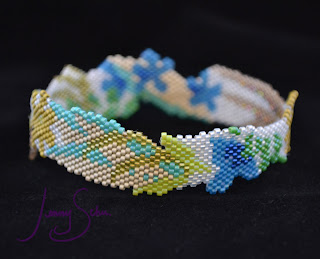 I must have been slightly out of my mind though when I was drafting this pattern.  I was torn between things I have to get done and things that I want to make.  I decided to take the want-to-make route and make this bangle.  I somehow managed to count out the circumference of this design 20 beads too big.  I thought that it seemed large when I strung on the first row, ignored the issue, and decided not to look back after I was well into it.  I love the design, and may even pull parts of it for other bangle drafts.  It's easy enough to take out 20 rows somewhere to make it "normal" sized later.  For now, I will wear it slid up on my forearm.﻿ 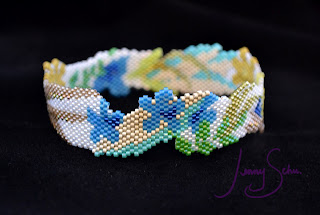 ﻿
I'm still thinking about making a larger version of the bangle, with a lot of white space.  It probably won't be wore along with the dress though.  Below is an image of the pattern in the dress (front middle). 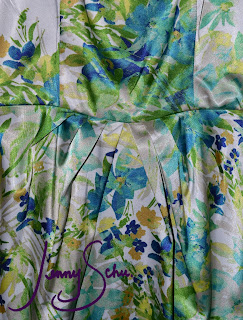 
Last week I went on an Internet radio show (and on Comcast's public service station) called Time Slot 2x.  I found myself bumbling through explaining how to weave fabric to Melik and Franklin Mint.  Which spurred me to make this video the very next day.

I was telling a weaver-friend about my struggle in explaining how to weave fabric, and she said she keeps it simple "it's over under over under" which is plain weave, which is simple.  I tend to think of weaving in much more complex terms (and I'm not even in a complex weavers group) so I've decided I should put some video up to show people just what us weavers do and can do.

My apologies for the lousy video, it's the first time I've taken video on this camera, I think it had a hard time focusing. 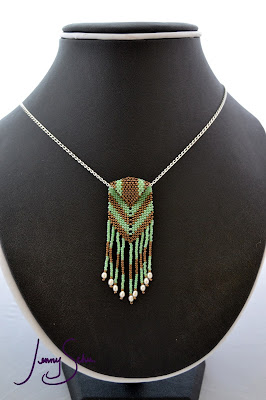 On Tuesday I was beading at Grove Gallery and mulling over a new pendant design.  I have been wearing a long sterling chain lately, and I wanted something that would have some length, but also a bit of width too.  I've noticed a trend in long necklaces with a chunky pendant on them coming out in storefronts and popping up on Pinterest. 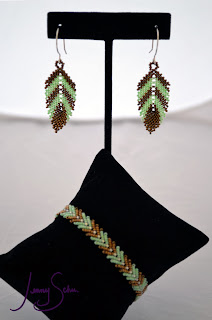 Since I'm on this chevron kick, I decided to try a pendant to match a pair of mint green and dark gold chevron earrings. The first photo up top and below is what I came up with: 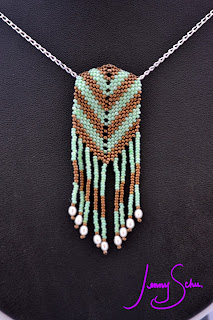 I usually hate to put on fringe, it never looks perfect and I bead so tightly I have to tug it out a bit to let it hang.  Using heavier beads toward the bottom would help, but I love the look of the freshwater pearls with the tiny 15/0 seed beads. 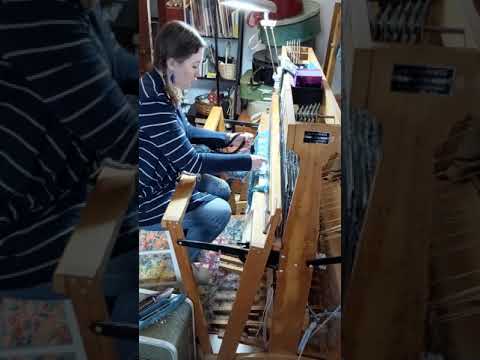