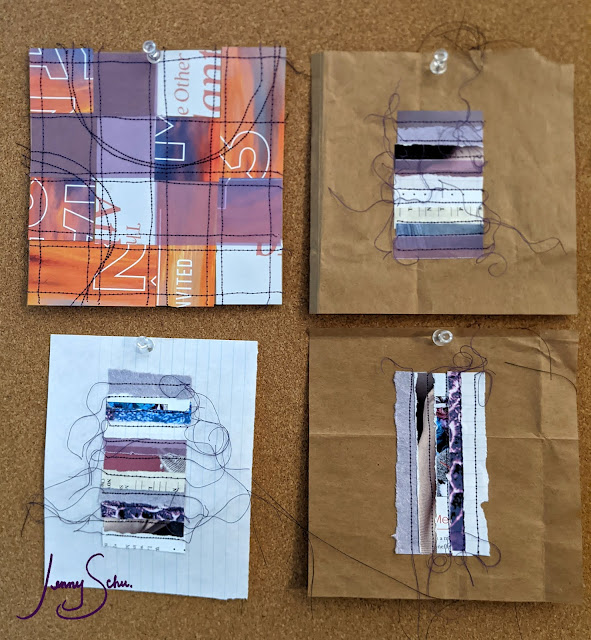 I'm so grateful and fortunate that as a member of the Ann Arbor Fiberarts Guild the board has worked hard to move meetings to Zoom so we can meet virtually.  They have also teamed up with the Needlework and Textile Guild of Michigan to share meetings, speakers and workshops.  This month NTGM had David Owen Hastings as their speaker.  After seeing some of his pieces I made sure to take work off for his lecture.  I really appreciate seeing someone's creative process and hearing them speak before I take a workshop with them.  I actually try not to take workshops very often because I can easily get distracted from my own artwork goals. I decided I needed something to look forward to on the day one of his workshops was being offered.  I happened to have that day off and it was dreary and raining so I couldn't work on my garage roof.  I have also been asked if I am willing to teach workshops on Zoom and I wanted to see how a workshop which is usually "hands on" would work in this manner. 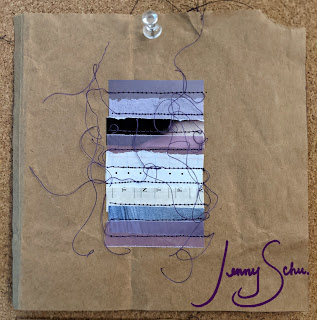 After Mary R. posted her paper collage pieces on the Ann Arbor Guild's Facebook Member Page I talked myself right into this workshop that they were having again the following week.  I've done some sewing with paper in the past and I've never gotten too hooked on paper projects so I figured this would be safe to play for a few hours and put it down.  The above piece is the first one I created.  I love that I didn't have to go get anything extra for this workshop, we used stuff I already had at home and David's materials prep list had alternates for things if you didn't have them on hand.  Like I used post-its to frame up the strips on the base paper but I'm probably going to pick up some painters tape at work for ease of this particular process.  The above piece was my first one and I might have gotten hooked immediately.  Next I just wanted to see what the paper strips looked like I ruled notepaper; I didn't like it as much as seen below. 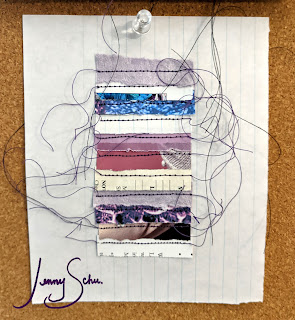 For my third little piece I went back to the brown paper bag square as a base, it's just a nice subtle background with a hint of texture. This workshop gave me a little nudge out of my 2020 studio-box of mask making and some weaving.  I've also been knitting in the evenings instead of beading, but that's not in the studio. 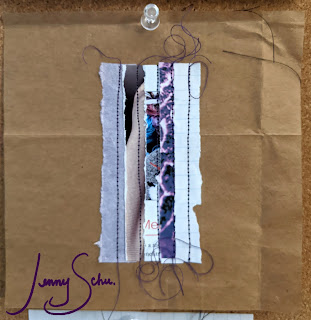 I have to admit I struggled with the second half of the class.  The process of cutting and turning and flipping pieces of paper until they looked satisfactory felt more like I was trying to make a puzzle work that wasn't meant to be a puzzle.  I solved part of my issue with a purple sheer vellum and called it good.  I'm fairly pleased with how the below piece turned out, mostly because I like the color pallet. 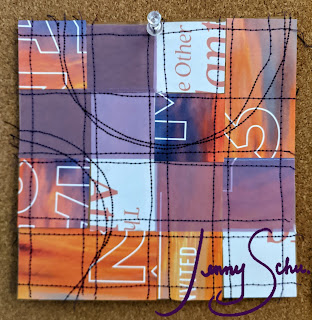 I recall as I was spinning and moving these pieces of paper around to make a thing, anything, that I could quit and be happy with the first portion and go back to playing with the strips which were easy for me.  Instead I pressed on because workshops are about a little bit of fun challenge and learning new techniques. As with many of my pieces, I thought "well I'm not doing that again" but as I let the process of flipping pieces of text around in paper, the thought occured to me that I could do this with a single text in my own work.  I do a lot of layering words and fonts in my weavings, I love to give viewers hints of words, jumble them so that people start to see what they relate to in word pieces rather than wondering what I'm getting at.  This process that David taught us is definitely going to transfer into my work at some point.  Something I didn't really feel like doing at the time ends up being a big "ah ha!" days, weeks later. 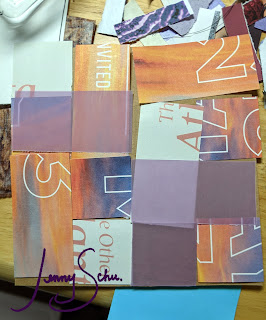 I also have to point out my big sewing take-away from David.  He uses a 1-inch strip of fabric to start and end the thread as he sews pieces on his machine.  Holy moly, I can't believe I've never heard of this before.  With all of my mask sewing (and now paper) this is going to be a thread and tension saver.  I love getting those random tips and tricks that will change the way you do something (machine sew) for ease and comfort.  That is a good reminder of why I need to take more workshops, the best way to learn is from each other. 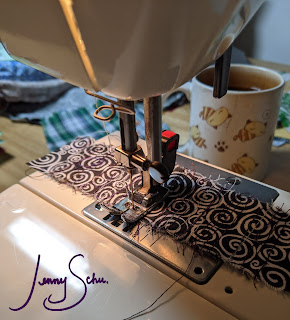 This sweater began with an award from a Michigan League of Handweavers Fiber Art Exhibit during the last Conference. My award was a gift ce... 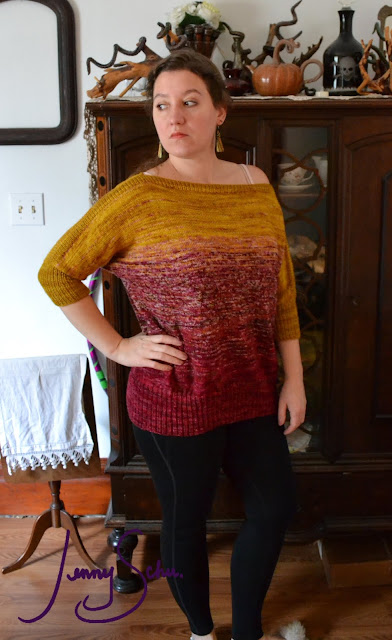